COSTA BINGO, WHAT YOU NEED TO KNOW

Costa bingo overall is an extremely popular bingo site. If you’re looking for somewhere new to play then we recommend giving Costa Bingo a try. With £5 free with no deposit required why not? Costa Bingo has a great variety of games and loads of promotions on offer. Become a VIP and get even more exclusive promotions.

The website is easy to use with registration, verification and deposits easy to complete. The only downsides are the lack of chatrooms, slightly smaller prizes then you’d find elsewhere, low number of deposit options and long withdrawal times on winnings.

Costa Bingo is fast becoming an underrated UK favourite when it comes to online bingo sites. This rather small site has so much to offer. When it comes to promotions and rewarding players there isn’t a site with more to offer. When we say there are loads of promotions we mean it. Right from the off your given a free no deposit bonus plus 3 cheap and easy to claim deposit bonuses.

Other then that there are at least 5 regularly run promotions to take advantage of. The loyalty program is one of the best and is extremely generous.

Costa Bingo is powered by Brigend Limited, who are owned by Cassava Enterprises (Gibraltar) Limited. The company is licensed and registered in Gibraltar

As bingo sites go Costa Bingo has promotion after promotion for its players. It starts with a no deposit bonus, plus 3 deposit bonuses, numerous going promotions and a heavily rewarding VIP program.

As soon as you sign up and provide valid card detail for your account, your given £5 free. You can use this free no deposit bonus on their bingo games. All that is required is you sign up enter your card details – no money will be taken from your account.

The first of 3 deposits bonuses on offer gives you 120 free bingo tickets with a deposit of £10. Simply deposit just £10 (nothing more and no code needed) and get 120 free bingo cards for 4 Costa Bingo rooms.  The four bingo rooms are “Ticket to Ride” a 75-ball game with 1/2TG, Just the Ticket a 75-ball game, Golden Ticket room a 90-ball bingo game and the Choo Choo Ticket and 5-line bingo game. The bingo rooms are open from 10am to midnight daily.

The second deposit bonus to claim is 60 bingo tickets for a £10 deposit. Like the first bonus all you need to do is deposit £10 and you’ll get 60 bingo tickets to the Choo Choo Ticket Bingo room.

The third deposit bonus gives you 30 free bingo tickets with a £10 deposit. It works just like the other two, but the 30 bingo tickets are available on Golden Ticket bingo room.

So basically, you’re getting a total of 210 bingo ticket for a total £30 deposit (3x £10), compared to other bingo sites that’s a tonne of free bingo!

Costa Bingo have an incredible rewarding VIP program called the “Diamond Club”. Your entered as soon as you sign up and make your first deposit. Every pound you wager awards you diamonds which you can collect, accumulate and convert into free games, no deposit bonuses, cash bonuses and more.

There are 5 VIP classes, obviously the more you deposit the higher you go and the bigger the rewards. The classes are as follows:

Below are the benefits awarded with each VIP level: in addition to those below you can also benefit from special weekly promotions, birthday bonuses, jackpots and more free bingo. For Silver, Gold and Platinum levels you can also get VIP games, VIP special promotions and a personal VIP email service. 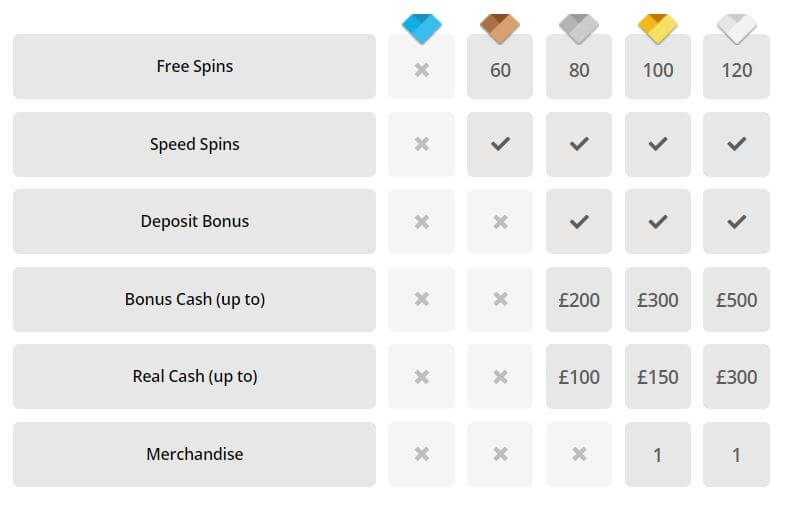 Costa Bingo doesn’t offer a dedicated android or iOS app, but their mobile site is impressive. Its available through your devices web browser.

GAMES ON OFFER AT COSTA BINGO

Since 2016, Costa Bingo is powered by the Dragonfish software. This evolution made Costa Bingo the first Dragonfish bingo site, an achievement that came with several advantages. For instance, the site has a choice of the lobby that makes the site a lot friendlier to players that access the games via mobile, tablets and other handheld devices. And, since the transition, it has been able to offer players better graphics and sound on the various games featured on the portal.

Because of the impressive software capabilities, Costa Bingo has a diverse range of games for bingo lovers. These include the famous 90-ball and 75-ball bingo versions. In addition, players seeking more diversity can delve into the relatively new 52-2 ball version that the site offers. Costa Bingo’s forte, however, is the 90-ball bingo, which is also the most famous among UK bingo lovers.

The 75-ball bingo is a variant of the 90-ball game and a delight of North American bingo players. The pay-outs on both kinds of games highly depend on the number of players registered in each gaming session and the cost of tickets in the said sessions.

The 52-2 version of bingo is similar to 90-ball and 75-ball bingo. It, however, differs slightly from the two in the visual manner of display that depends on the theme each game adapts. Unlike the traditional bingo games, the games can contain only numbers between 0 and 52 and each of these is represented by different objects based on the theme of the game.

The site has a customer support desk that is reachable via an in-room chat facility as well as through the email [email protected] and via the phone number 0808 238 9881 for UK residents and +12684 844 830 for players calling from outside the UK.

All the main banking options are available at Costa Bingo including the basic card and e-wallet options.

The minimum deposit amount is £5 and players are allowed to register up to 3 different options per account. Within your account you are also allowed to set daily, weekly or monthly deposit limits.

Like deposits the minimum you can withdraw is £5. Players can request up to 10 withdrawals per day. It important to understand that withdrawal requests can only be made to the same method used to deposit.

Withdrawal times varies depending on option. Look out for “Cassava Enterprises” on your statement once withdrawal is received. There is a 2-day withdrawal process in additional to the time taken to complete a withdrawal. Below lists the total turn around time for a withdrawal based on each withdrawal option.

Costa Bingo is a good and dependable site with a lot of offers and an impressive array of games. It accepts many convenient payment methods and is generally geared towards offering a good online experience. However, the payouts take considerably longer (4 to 7 days) to process, a fact that irks most online bingo players.